Alicia Hinds Ward was named the 2013 Armed Forces Insurance Military Spouse of the Year ® today in recognition of her outstanding commitment to the military community.

Video of the awards ceremony will be available on Military Spouse mag YouTube channel.

Nominated by her husband, Tech. Sgt. Edwinston Ward, Alicia's accomplishments include serving as the Key Spouse for the 113th Logistics Readiness Squadron, Relocation Assistance contractor, Exceptional Family Member Program (EFMP) Family Panel Representative for the National Guard and the co-founder of the Joint Base Andrews Business and Community Support Group and Spouse Forums. She is the first National Guard spouse to receive this prestigious award. With the reach of the Military Spouse of the Year ® organization behind her, Hinds Ward is planning to advocate for better spouse employment options and special needs resources. 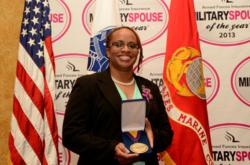 “Each military spouse who competed in the 2013 Military Spouse of the Year (MSOY) competition is to be commended for their devoted support to the dedicated military men and women in uniform who serve our nation each and every day,” said Garry L. Parks, Lieutenant General, U.S. Marine Corps (Ret), Chairman of Armed Forces Insurance, the MSOY Title Sponsor. “Today we appropriately paused to honor 'the' 2013 MSOY, Mrs. Alicia Hinds Ward. Concurrently, however, we applaud every military spouse, the unsung heroes who maintain the home-front during lengthy deployments, selflessly give back to their communities through volunteer work, and provide moral support for their loved ones serving both at home and in harm's way. Both individually and collectively, these spouses contribute so much to our nation's armed forces. On behalf of Armed Forces Insurance, we salute each of you!”

Prior to announcing the overall 2013 Armed Forces Insurance Military Spouse of the Year ® , the finalists from each branch of service were honored at the annual awards luncheon which was hosted at the Fort Myer Officers' Club by Mrs. Betty Welsh, spouse of General Mark Welsh, Air Force Chief of Staff and attended by military and civilian VIPs: The Awards were also streamed live for the first time via the magazine's website.

These Branch Winners emerged from a pool of more than 900 nominees, advancing through three separate rounds of voting and a judges' panel review.

For more information on the Military Spouse of the Year® program, please visit http://msoy.militaryspouse.com.

# # #
About Military Spouse
Military Spouse magazine and http://www.militaryspouse.com, published by Victory Media, is the leading national magazine and online destination for the nation's 1.1 million military spouses. You can follow us on Facebook at http://www.facebook.com/militaryspousemagazine and on Twitter @MilSpouseMag. Victory Media, a service disabled veteran owned small business, also publishes G.I. Jobs magazine, Vetrepreneur magazine, and has created the Buy Veteran movement powered by NaVOBA.

About Armed Forces Insurance
AFI was founded in 1887 by military leaders with a single mission: to protect the property of those who protect our nation. The company provides premium quality, competitively-priced property and casualty insurance to military professionals throughout the United States and overseas. AFI understands that military members have unique circumstances and insurance needs, enabling the company to offer a level of personalized service that's unequaled in the industry. For more information, visit the website at http://www.afi.org or call 1-800-495-8234.